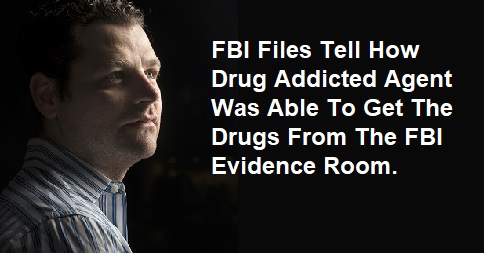 FBI agent Matthew Lowry checked out Item 1B4 from the evidence room at the bureau’s Washington field office on an August morning in 2013. He wrote “to lab” on a log sheet to explain why he was taking drugs that had been seized in an undercover operation dubbed Midnight Hustle.

But it was nearly a year later when he delivered the drug package to the lab. For 10 months, court records show, the heroin had gone unaccounted for and unmissed. When the package made it back to the FBI office in September, it weighed 1.1 grams more than when it had been seized.

Someone had tampered with the contents, prosecutors said later.

The package is one piece of a tale that has unfolded in recent months — the case of an FBI agent who, by his own admission, repeatedly stole heroin from evidence bags for his personal use. In the process, he sabotaged drug cases that he and his colleagues had labored on for months. Prosecutors have dismissed charges against 28 defendants in three cases, many of whom had already been convicted, and they say it could affect 150 other defendants.

The revelations have exposed a system of weak checks and balances that allowed Lowry’s thefts and drug use to go undetected for at least 14 months as he worked on a task force focusing on heroin traffickers along the borders of the District, Maryland and Virginia. The problems were discovered only after the agent disappeared after work Sept. 29 and was found by colleagues incoherent, standing next to his disabled bureau car in a construction lot near the Washington Navy Yard.

FBI documents say the agency vehicle, which had run out of gas, was littered with bags of heroin “sliced open and drugs removed,” along with a shotgun and a derringer pistol seized during a drug raid but never logged into evidence.

An examination of court records and more than 600 pages of internal FBI documents obtained by The Washington Post — including statements Lowry made to investigators describing his actions — provides a detailed look at his elaborate deception and downfall. The case has prompted an exhaustive review of how drug evidence is handled in one the largest and most prestigious of the bureau’s 56 field offices.

“It’s shocking that there was such little oversight,” said Steven H. Levin, a private lawyer in Baltimore with 10 years’ experience as a federal prosecutor, much of it overseeing the violent-crimes section in Maryland. “It’s something you would expect to see on a made-for-TV movie. . . . You’re thinking, there is no way that could ever happen. And that’s what happened.”

Lowry, 33, remains the target of a criminal investigation that is being led by federal prosecutors in Pennsylvania to avoid any conflict of interest. He has not been charged with a crime, but he was suspended from his job and entered into drug counseling immediately after he was found in September. His attorney, Robert C. Bonsib, declined to comment for this article, but he has said his client is cooperating with authorities. In the documents, which were provided to defense attorneys in the drug cases under review, Lowry said that he turned to heroin after becoming addicted to prescription painkillers because of an illness and that he started taking heroin from evidence in the summer of 2013.

A spokesman for the FBI’s Washington field office, Andrew Ames, issued a statement saying protocols for handling evidence are being tightened. “The incident has brought to light certain vulnerabilities the office is addressing to reduce the likelihood of this type of misconduct happening again.”