Home FBI FBI Free To Ambush Our Bill Of Rights

FBI Free To Ambush Our Bill Of Rights 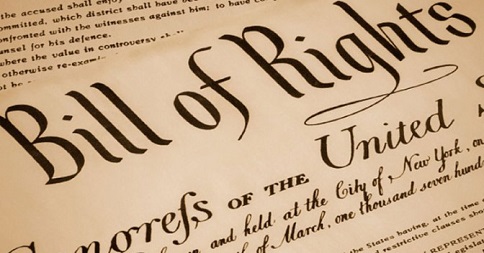 When I was a kid, beginning to learn what it is to be an American, I found a hero in George Mason, a leading Virginia delegate to the 1787 Constitutional Convention. Mason refused to sign on to the Constitution that was passed by the convention. Why?

“There is no Declaration of Rights,” he explained.

There was no section in the Constitution protecting citizens’ individual rights against an imperious government in this new America — similar to the charges Thomas Jefferson made against King George III’s government in our Declaration of Independence in 1776.

George Mason’s contagious objections became a major reason that the first 10 amendments, the Bill of Rights, were finally listed and ratified by enough states to be added to the Constitution in 1791.

And we still proudly have them! Or do we? As George W. Bush, Dick Cheney and Barack Obama have eroded our guarantees of a self-governing republic, how many Americans are aware they are losing some of the liberties guaranteed in the Bill of Rights? How many Americans even know who George Mason was?

Thomas Jefferson said Mason was “of the first order of greatness” (“George Mason’s ‘Objections’ and the Bill of Rights,” Robert A. Rutland, “This Constitution: A Bicentennial Chronicle,” American Political Science Association and American Historical Association, 1985).

I know enough about my hero to have no doubt what George Mason’s reaction would be to one of the most persistent and unpunished present violators of the Bill of Rights — the FBI!

In the fall of 2008, just before the Bush administration left, then-Attorney General Michael Mukasey changed and expanded the Attorney General’s Guidelines for Domestic FBI Operations. The guidelines were made official on Dec. 1, 2008. They remain in force under Obama.

If James Madison and Thomas Jefferson could see this shredding of the Bill of Rights, they might be leading another American Revolution.

When the FBI guidelines were released, I did my part, writing several columns on this disembowelment of our American identity. But Michael Ratner of the Center for Constitutional Rights and Margaret Ratner Kunstler more clearly exposed the guidelines’ contempt for our privacy in “Hell No: Your Right to Dissent in 21st-Century America” (New Press, 2011).

One chapter in particular lists the FBI guidelines, explaining how they throttle the Bill of Rights:

“The Mukasey guidelines, under a section titled ‘General Authorities,’ dispense with the Privacy Act restrictions on keeping records about United States citizens and permanent residents, flatly stating that all activities authorized by the guidelines are exempt from the Privacy Act.”

Here, as demonstrated by Ratner and Kunstler, is the America in which you are now living:

“As surveillance and the gathering of information can be carried out without any criminal predicate and on the completely innocent, these guidelines have effectively granted the FBI the authority to use and retain records on millions of law-abiding Americans.”

Where is that allowed in our Constitution?

When I was a kid, I read Arthur Koestler’s “Darkness at Noon,” a book about Josef Stalin’s Russia that turned me into a fiercely unyielding anti-Communist for the rest of my life. During the so-called Great Depression, I remember arguing with Communists in my Boston neighborhood about Stalin keeping an eye on law-abiding Russians.

When I became a reporter years later, specializing in dangers to our civil liberties, I was startled by the extent to which J. Edgar Hoover’s FBI had secretly infiltrated so many entirely lawful organizations with informants and instigators of illegal actions, insatiably searching for Communists, fellow travelers and other suspicious “persons of interest.”

Hoover is gone, but here I am now with this account by Ratner and Kunstler, learning that “the FBI is ‘authorized and encouraged’ to identify and recruit informants, even if the activities to be investigated are totally lawful… Informants often end up participating in active ways and even suggesting tactics, some of which may be illegal — depending on what the informant’s FBI handler suggests.”

Watch carefully some unfamiliar organizations you may consider joining. In protecting the rule of law, are they being goaded from the inside to go beyond it?

Next week’s column will be visited by Michael German of the American Civil Liberties Union’s Legislative Office, where he is policy counsel on national security, immigration and privacy.

Previously, German was an FBI special agent from 1988 to 2004 in domestic terrorism and other investigations who, as the ACLU notes, “also served in undercover operations, successfully helping to prevent several terrorist attacks.

“He resigned in 2004 to make Congress and the public aware of the continuing deficiencies in FBI counterterrorism operations after the implementation of the 9/11 Commission’s reforms” (“Intelligence Expert and Former FBI Agent Joins ACLU as National Security Counsel,” aclu.org, Oct. 5, 2006).

“I joined the FBI because I wanted to defend this country,” German says, “but the oath I took was to defend the Constitution. Working for (the Bush) administration, I felt as though I was participating in a dark chapter in American history.”

Ultimately, German joined the ACLU because he knew he must uphold “what this country stands for: We can, and must, be both safe and free” (aclu.org, Oct. 5, 2006).

Michael German merits the Presidential Medal of Freedom — if we ever get a president who insists that the FBI operates within the Constitution.

But instead, today’s Attorney’s General Guidelines for Domestic FBI Operations turn untold numbers of law-abiding Americans into persons under surveillance.

Is that what the rest of us stand for?