Comey Thinks FBI Directors Can Unlawfully Do Whatever They Want 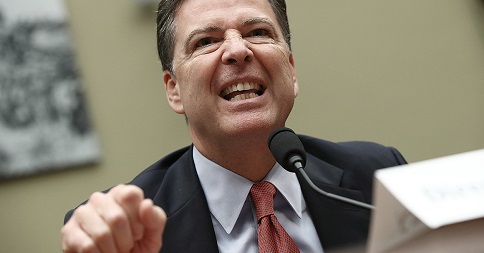 Last month, special counsel Robert Mueller revealed something disturbing about former FBI Director James Comey. Here’s what Mueller disclosed: In January 2017, when Comey sent FBI agents to interview then–national security adviser Michael Flynn, Comey bypassed his own boss, Acting Attorney General Sally Yates. The story sounds innocuous, and it doesn’t serve either party’s narrative, so nobody made a fuss about it. But it’s important. It exposes the twisted thinking that led Comey to change the course of history—and could tempt other public officials to make themselves unaccountable.

Comey is fair and honest. But he’s so confident in his judgment and so wary of his bosses that he cuts them out of decisions. He formulates his own ideas, not just about what’s right or wrong, but about how various legal or administrative decisions might play out politically. Based on these guesses, as FBI director, Comey sometimes circumvented the chain of command and concealed what he was doing. He claims to have done this only when his bosses behaved or appeared to behave in a partisan way. But Mueller’s disclosure shows that’s not true. Comey thinks an FBI director is entitled—and, in fact, is morally required—to end-run the political appointees who supervise him.

In 2016, Comey evaded his bosses—Attorney General Loretta Lynch and Yates, who was then the deputy attorney general—on two key decisions. The first was in July, when he called a press conference to announce that Hillary Clinton and her aides had been “extremely careless” with classified information but that the FBI hadn’t found enough evidence to prosecute her. Comey cut Lynch and Yates out of this decision. According to a June 2018 report by the Justice Department’s Office of the Inspector General, Comey later told the IG’s interviewers that he “concealed his intentions from the Department until the morning of his press conference.” He also “instructed his staff to do the same, to make it impracticable for Department leadership to prevent him from delivering his statement.”

The second decision came in late October 2016, when Comey sent a letter to Congress to report that the FBI had found additional Clinton emails and was reopening the investigation. According to the IG report, Comey didn’t speak directly to Lynch or Yates before sending the letter. Instead, he asked an aide to inform the department through a bureaucratic channel. When Lynch and Yates used the same channel to tell Comey that they strongly opposed the letter, he sent it to Congress anyway. Comey later explained to the IG’s interviewers that he had interpreted the response from Lynch and Yates as, “It’s up to you.”

The IG report reprimanded Comey for these decisions. “Open and candid communication among leaders in the Department and its components is essential for the effective functioning of the Department,” said the report. It concluded that Comey’s unilateral moves were “insubordinate,” “usurped the authority of the Attorney General,” and violated “well-established Department policies in a way intentionally designed to avoid supervision.”

In his answers to the IG inquiry, Comey gave two reasons for evading Lynch. One was that she had created, through specific acts, an appearance that she was biased in Clinton’s favor. Comey recalled with unease that at one point, Lynch had instructed him to call the Clinton inquiry a “matter” rather than an “investigation.” And what ultimately “tipped the scales” and forced him to circumvent Lynch, he asserted, was her private conversation with Bill Clinton on an airport tarmac in June 2016.

The other reason Comey gave was Lynch’s political affiliation. She had been appointed by a Democratic president, Barack Obama. Comey told the IG’s interviewers that if he had involved Lynch in the announcement of the FBI’s recommendation not to prosecute Clinton, this would have produced “corrosive doubt” about the decision’s integrity since “Lynch was appointed by a president who was from the same political party as former Secretary Clinton.”

Comey implied that these arguments for evading supervision were limited. Theoretically, if Clinton had been a Republican, it would have been OK to involve a Democratic-appointed attorney general in the decision to clear her. Comey also stipulated that being a political appointee, by itself, wasn’t disqualifying. If Lynch “had recused herself and made Sally Yates the acting attorney general,” Comey told Congress last month, “I think what I would have done in that circumstance is hand [the decision] to Sally, who did not have the issues that Loretta had … with potential appearance of bias.”

That was the story Comey told a month ago, on Dec. 7: He was willing to consult Yates, and this proved that he was judicious, not cavalier or insubordinate. But a week later, that story fell apart. In a Dec. 14 court filing, Mueller disclosed a Justice Department document about Comey’s decision to send FBI agents to interview Flynn. The reason for the interview, which was arranged and conducted in January 2017, was that Flynn had held secret talks with Russia and had lied about them to Vice President Mike Pence.

At the time of the Flynn interview, a few days into Trump’s presidency, Yates was the acting attorney general. She was Comey’s boss and was heavily involved in the Flynn inquiry. The decision about when to interview Flynn was complex, since the Justice Department needed to warn Pence without prematurely alerting Flynn that the national security adviser was under investigation. It was exactly the kind of decision the FBI director should have left to the acting attorney general. Instead, Comey cut Yates out of the loop. According to the document filed by Mueller, “When [Comey] told her the FBI was interviewing Flynn she was not happy.”

At a hearing on Dec. 17, three days after Mueller filed the document, Republican Rep. Trey Gowdy asked Comey why Yates had been unhappy:

After the hearing, a reporter asked Comey why he had cut out Yates. Comey replied: “Because I knew that if anything came of the interview, if it advanced our investigation, the attack from the Trump administration would be that an Obama holdover had engineered it. And so I had to make the decision separate from her.”

Comey’s explanation radically expanded his rationale for unilateral acts by an FBI director. Yates, by Comey’s own account, had done nothing to create an appearance of bias. Nor had she been appointed by a president of the same party as Flynn, the person under investigation. Nevertheless, Comey deemed her unfit to participate in the interview decision—and, in fact, hid it from her—based on a political line of attack Comey expected from Trump. Having justified the FBI director’s evasion of Justice Department officials from the same party as the target of an investigation, Comey was now justifying the evasion of officials from the opposite party.

Comey’s circumvention of Yates was arrogant and wrong for three reasons. First, his calculus was based entirely on political prognostication. He had no special expertise in such matters and no grounds to think he was smarter about them than his boss. Second, this was January 2017. Comey, by his own admission, had expected Clinton to win the election. He worried, in retrospect, that this expectation had skewed his decisions in 2016, and he was distraught at the idea that he might have tipped the outcome. Yet here he was, two months later, making another unilateral decision based on political guesswork. He had learned nothing.

Third, Comey’s rationale made the FBI director virtually autonomous. Every Justice Department official who oversees the FBI is appointed by one party or the other. In July 2016, Comey excluded these officials from a decision favorable to an investigative target who belonged to their party. In October 2016, he ignored their input on a decision unfavorable to the same target. Then, in January 2017, Comey excluded Yates from a decision about an official from the other party. Comey didn’t know whether his decision would help or hurt Flynn. It depended, in Comey’s words, on whether “anything came of the interview.” But just in case, he cut Yates out of the loop. Comey’s logic disqualified all political appointees from all decisions. The FBI director would have to act on his own.

I don’t want to pick on Comey. He’s a good man who made difficult decisions as faithfully as he could. The portrayals of him as a political hack are garbage. He refused to let Trump corrupt him, and that’s why he lost his job.

But Comey hasn’t reckoned with the perils of his hubris. He calls the Clinton investigation a “500-year flood” that required unilateral decisions by the FBI director. Now we know that’s bunk. Comey continued to usurp authority in 2017. He did so based on arguments that could be applied every day. In the end, what protects us from the abuse of power isn’t that our public officials are honest. It’s that they’re accountable.