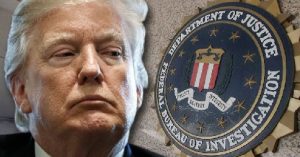 In examining the cast of FBI and senior Department of Justice (DOJ) officials fired, retired, resigned and under investigation since May 2017, the breathtaking scope of the FBI’s unprecedented criminal efforts to overthrow a presidential election and frame a newly elected president serves as Exhibit A for the organization’s disbandment. The “leadership” that willfully and corruptly ignored Hillary Clinton’s criminal mishandling of highly classified information had no problem faking a counterintelligence investigation to smear and destroy President Trump, according to Chief Investigator Chris Farrell of the non-profit, non-partisan public interest group Judicial Watch.

In a press statement issued by the phenomenal non-government organization headed by Tom Fitton, Investigations Chief Farrell provides “a recitation of the FBI/DOJ Litany of Shame is called for: Comey, McCabe, Strzok, Page, Baker, Ohr, Yates, Priestap, Rybicki, Kortan, Campbell, Turgal, Bower, Steinbach, Giacalone, Laufman, Carlin, McCord — there are more, and eventually we’ll learn their names. Some took unlawful action draped in the American flag and smarmy self-righteousness. Some were careerists craving a retirement paycheck and a strong resume, standing by and doing nothing — negligent or complicit with guilty knowledge.”

The group dubbed the “Secret Society” by FBI lawyer Lisa Page in a text to self-anointed FBI “Super Agent” Peter Strzok had a clear goal: Stop Trump. But how to do that “legally”? How does one manufacture a phony Russia hoax and hang it around Trump’s neck when you’re constrained from going after his campaign, organization and staff?

The FBI is specifically prohibited from penetrating and subverting U.S. organizations under the provisions of Executive Order 12333, Section 2.9: “No one acting on behalf of agencies within the Intelligence Community may join or otherwise participate in any organization in the United States on behalf of any agency within the intelligence community without disclosing his intelligence affiliation to appropriate officials of the organization, except in accordance with procedures established by the head of the agency concerned and approved by the attorney general.” That’s tough for the “secret society.”

Could they — would they — rely on Attorney General Loretta Lynch, and have her office generate a legal finding memo? An actual, discoverable, legal record detailing and authorizing an operation against a presidential candidate? Too risky on a few levels.

But there’s more to Section 2.9: “Such participation shall be authorized only if it is essential to achieving lawful purposes as determined by the agency head or designee. No such participation may be undertaken for the purpose of influencing the activity of the organization or its members except in cases where: (a) The participation is undertaken on behalf of the FBI in the course of a lawful investigation; or (b) The organization concerned is composed primarily of individuals who are not United States persons and is reasonably believed to be acting on behalf of a foreign power.”

That second portion of Section 2.9 was exploited by Strzok & Co to create the predicate for a foreign counterintelligence investigation overseas that would then be “imported” back into the United States — circumventing the prohibition on “Undisclosed Participation in Organizations Within the United States.” Using this technique, Strzok & Co wouldn’t be offensively targeting the Trump operation to subvert his election and presidency. The FBI would now be “reacting” to a foreign intelligence threat.

Hence, we have the widely reported (FBI designed and orchestrated) events surrounding Carter Page, George Papadopolous, Stef Halper, Joseph Mifsud, Alexander Downer, et al. Super Agent Strzok even traveled to the United Kingdom (the safest “Outside the Continental United States” [OCONUS] operating environment for the FBI) to grease the skids for a counterintelligence “dangle” operation. The reader will recall Lisa Page’s December 2015 text message: “You get all our oconus lures approved? ;),” to Strzok.

Having personally run double-agent operations as a counterintelligence case officer, I’m not guessing at this language and intelligence tradecraft.

Thrilled with the initiation of their foreign counterintelligence investigation implicating Trump “associates,” (and laundering the criminality of their end-run of “undisclosed participation”) the secret society could launch full-bore with an array of techniques and tradecraft. Keep in mind that the FBI/DOJ never gave Trump a “defensive security briefing” that is standard when FBI/DOJ comes upon a foreign counterintelligence threat to a U.S. organization or corporation. Never.

Not coincidentally, the “Trump Dossier” appears on the scene — thanks to Hillary Clinton and Democratic National Committee funding, via a couple of cut-outs, to actual Russians (a crime actually worth investigating). Next come the Foreign Intelligence Surveillance Act warrants, predicated on Hillary’s mercenary’s lies. Now we know the FBI went so far as to phony-up investigative reports (“302s”) in the related framing of LTG Mike Flynn. Is there anything the FBI/DOJ leadership wouldn’t do to stop Trump?

Here’s the big picture: there are the crimes described above — and there are the crimes to facilitate and then cover-up the underlying activity. That’s where the FBI got lost. It’s gone. No sensible American believes in the organization anymore. The DOJ is right there with them. Compromised, arrogant, ruthless, vindictive, detached, self-righteous, hypersensitive to criticism and largely immune. A fish rots from the head down. Go back and read the FBI/DOJ Litany of Shame. Review Comey’s arrogant, smug, Flynn-interview statement: “something I probably wouldn’t have done or maybe gotten away with in a more … organized administration.”

The answer is to create an investigative division within the U.S. Marshals Service and laterally transfer over vetted, honest FBI agents. Collapse the decayed wreck of the FBI within six months and hope the American public can once again believe in “Equal Justice Under the Law.”