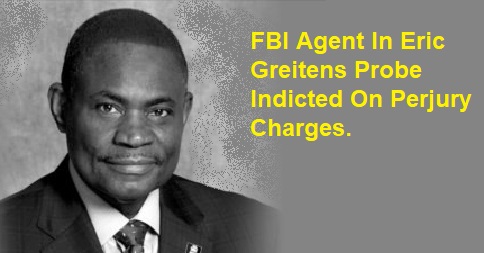 A former FBI agent who was involved in the criminal investigation of former Missouri Gov. Eric Greitens turned himself in Monday after being indicted as part of a perjury investigation.

William Tisaby surrendered to authorities on the same day that an indictment against him was unsealed. He then pleaded not guilty at his arraignment and was released on his own recognizance under the conditions that he surrenders his passport and informs a probation officer of any travel plans.

Tisaby, who lives in Trussville, Alabama, was hired last year by St. Louis Circuit Attorney Kim Gardner to investigate allegations that Greitens took a compromising photo of his hairdresser and threatened to share it if she exposed their affair in 2015, a year before the Republican was elected governor. The indictment noted that relying on an outside investigator was “contrary to normal protocol.”

Gardner’s handling of the Greitens case drew strong criticism from his attorneys, who asked police to investigate whether Tisaby lied under oath as part of a deposition of the woman involved in the affair. Last June, Mullen appointed Gerard Carmody as special prosecutor to oversee that investigation.

Gardner says she decided to dismiss the case after the judge granted a request by Greitens‘ lawyers to call her to testify about Tisaby. Gardner said at the time that it put her in the “impossible” position of being a witness in a case she was prosecuting. Despite the dismissal, Greitens, who was also under investigation over other concerns, resigned last June.

The indictment said Tisaby denied taking notes during his interview of the hairdresser, although a recording of the interview that he initially said was unwatchable because of an equipment malfunction showed him taking notes. The indictment also said that Tisaby falsely denied receiving notes from the prosecutor’s office before he interviewed the hairdresser, although a document uncovered during the grand jury proceedings shows that Gardner had provided Tisaby her notes from an earlier interview.

The indictment also was critical of Gardner, saying she failed to correct false statements.

Tisaby’s attorney, Jermaine Wooten, didn’t immediately return a phone message from The Associated Press seeking comment. He said previously that Tisaby is “very upset he’s being used as a scapegoat” and described him as “an honest and decent man.”

A spokesman for Carmody and a spokeswoman for Gardner said they are unable to comment because of a gag order in the case.

Scott Rosenblum, one of Greitens‘ former lawyers, described the prosecution as “misguided” and said that the allegations laid out in the grand jury indictment are “even more egregious than we thought.”