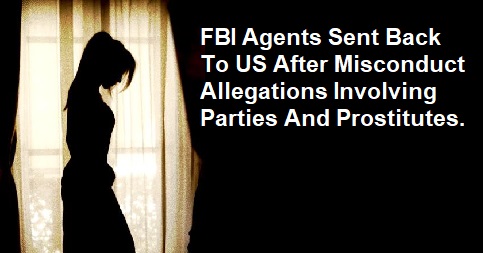 Numerous FBI agents sent to Asia to help combat international crime and terrorism have been ordered back to the United States amid allegations of misconduct — reportedly involving parties and prostitutes.

The allegations are linked to agents in six cities – some in East and Southeast Asia – and are related to parties and interactions with sex workers, people familiar with the matter told the Wall Street Journal. Specifics about the claims were not immediately clear.

“Upon learning of these allegations of misconduct, action was taken to reassign certain personnel to non-operational roles while the allegations are reviewed,” the FBI told Fox News in a statement Friday. “All FBI employees are held to the highest standards of conduct, and allegations against any employee are taken very seriously.”

Sources say a handful of FBI personnel were sent back to the U.S. as the Department of Justice Inspector General investigated the claims.

Former agents told the Wall Street Journal the FBI has offices in dozens of U.S. embassies around the world and the employees assigned to the posts — who are working to fight crime and terrorism — often cultivate relationships with local officials over late-night drinks.

Prostitution is also legal or tolerated in some Asian countries.

Those familiar with the allegations added FBI officials have been concerned with prostitution-related issues as they fight to prevent foreign intelligence services from compromising agents and embassy employees.

The allegations against the FBI personnel and exactly where the incidents took place was not made clear by the FBI.

In a statement the FBI said: “Action was taken to reassign certain personnel to non-operational roles while the allegations are reviewed. No additional information will be provided.”

Put it all together, and the FBI fits right in with these other federal agencies that like to party with prostitutes while they’re representing our Nation overseas:

In 2012, the Secret Service disciplined nearly a dozen agents amid allegations of interactions with prostitutes in Colombia while preparing for a visit by former President Barack Obama.

In 2015, US Drug Enforcement Administration agents in foreign postings attended sex parties with prostitutes paid for by drug cartels, the Justice Department found.