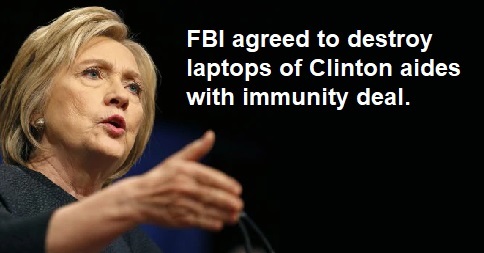 Sources said the arrangement with former Clinton chief of staff Cheryl Mills and ex-campaign staffer Heather Samuelson also limited the search to no later than Jan. 31, 2015. This meant investigators could not review documents for the period after the email server became public — in turn preventing the bureau from discovering if there was any evidence of obstruction of justice, sources said.

The Republican chairman of the House Judiciary Committee fired off a letter Monday to Attorney General Loretta Lynch asking why the DOJ and FBI agreed to the restrictive terms, including that the FBI would destroy the laptops after finishing the search.

“Like many things about this case, these new materials raise more questions than answers,” Committee Chairman Bob Goodlatte, R-Va., wrote in the letter obtained by Fox News.

“Doesn’t the willingness of Ms. Mills and Ms. Samuelson to have their laptops destroyed by the FBI contradict their claim that the laptops could have been withheld because they contained non-relevant, privileged information? If so, doesn’t that undermine the claim that the side agreements were necessary?” Goodlatte asks.

The immunity deals for Mills and Samuelson, made as part of the FBI’s probe into Clinton’s use of a private email server when she served as secretary of state, apparently included a series of “side agreements” that were negotiated by Samuelson and Mills’ attorney Beth Wilkinson.

The side deals were agreed to on June 10, less than a month before FBI Director James Comey announced that the agency would recommend no charges be brought against Clinton or her staff.

Judiciary Committee aides told FoxNews.com that the destruction of the laptops is particularly troubling as it means that the computers could not be used as evidence in future legal proceedings, should new information or circumstances arise.

Committee aides also asked why the FBI and DOJ would enter into a voluntary negotiation to begin with, when the laptops could be obtained condition-free via a subpoena.

The letter also asked why the DOJ agreed to limit their search of the laptops to files before Jan. 31, 2015, which would “give up any opportunity to find evidence related to the destruction of evidence or obstruction of justice related to Secretary Clinton’s unauthorized use of a private email server during her tenure as Secretary of State.”

Aides expressed shock at the parameter, saying it is especially troubling as Mills and Samuelson already had immunity from the consequences of whatever might be on the laptop.

“You’re essentially extending immunity to everyone,” one aide said.

The letter to Lynch sought to determine how many documents were blocked from FBI investigators because they fell outside of the date range agreed to by the DOJ.