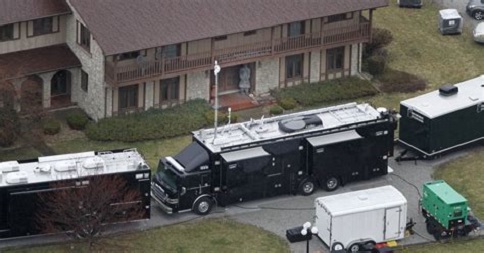 An extraordinary and disturbing story just out from the Indianapolis Star/USA Today:

WALDRON, Ind. — FBI agents Wednesday seized “thousands” of cultural artifacts, including American Indian items, from the private collection of a 91-year-old man who had acquired them over the past eight decades.

An FBI command vehicle and several tents were spotted at the property in rural Waldron, about 35 miles southeast of Indianapolis.

The Rush County man, Don Miller, has not been arrested or charged.

So if the owner hasn’t been arrested or charged, what’s the basis of the raid?

Robert A. Jones, special agent in charge of the Indianapolis FBI office, would not say at a news conference specifically why the investigation was initiated, but he did say the FBI had information about Miller’s collection and acted on it by deploying its art crime team.

FBI agents are working with art experts and museum curators, and neither they nor Jones would describe a single artifact involved in the investigation, but it is a massive collection. Jones added that cataloging of all of the items found will take longer than “weeks or months.”…

The aim of the investigation is to determine what each artifact is, where it came from and how Miller obtained it, Jones said, to determine whether some of the items might be illegal to possess privately.

Jones acknowledged that Miller might have acquired some of the items before the passage of U.S. laws or treaties prohibited their sale or purchase.

Might be illegal. Or might have been acquired lawfully. They’re not saying! But to satisfy its curiosity the government gets to seize everything and sort through at its leisure over longer than “weeks or months.”

It doesn’t sound as if the artifacts were in some sort of immediate danger:

The objects were not stored to museum standards, Jones said, but it was apparent Miller had made an effort to maintain them well.

I’ve written previously, elsewhere and in this space, about

the rise of a new “antiquities law” in which museums and private collectors have come under legal pressures to hand over (“repatriate”) ancient artifacts and archaeological finds to governments, Indian tribes and other officially constituted bodies, even when those artifacts have been in legitimate collector hands for 100 or more years with no hint of force or fraud.

Further regulatory regimes covering exotic and endangered animal and plant material make it dangerous to let the feds anywhere near your high-end guitar or other wooden artifact, and will soon make it unlawful to sell or move across state lines your family’s antique ivory-keyed piano (more here).

P.S. Coverage at broadcaster WISH-TV makes the SWAT-like federal occupation of Don and Sandra Miller’s property (an FBI “command center” and “massive tents” now surround the family’s home) seem even more appalling. Locally famous for his collecting, Miller has been anything but secretive about his holdings, which were featured in a four-part series in a local newspaper.