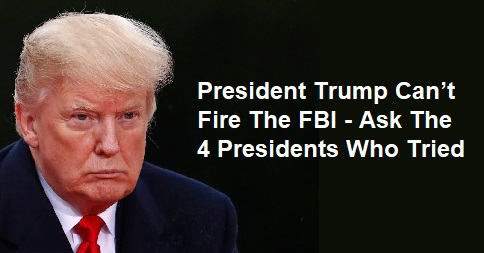 President Trump can not fire the FBI.

Minutes before ridding himself of Attorney General Jeff Sessions on Wednesday (Nov. 7, 2018), Trump answered a question about the Russia investigation at a White House news conference: “I could end it right now. I could say, ‘That investigation is over.’ ”

He could order Sessions’s acting replacement, Matthew G. Whitaker, who has mused wistfully about stifling the investigation by Robert S. Mueller III, to play the role of political assassin. He could direct Whitaker to cut the special counsel’s budget to zero. He could tell him to limit the inquiry’s scope. He could try to oust Mueller and to make sure his investigative report never sees the light of day. He could fire the FBI director, Christopher Wray — just as he fired the previous director, James Comey, last year — and put a political puppet in his place.

He could do any or all of these things, as politically foolhardy and constitutionally perilous as they might seem, while the Republicans who control the Senate look on and do nothing.

But short of sending tanks down Pennsylvania Avenue and blowing the J. Edgar Hoover Building to smithereens, Trump cannot stop the FBI. No commander in chief ever has, not before Hoover died 46 years ago, and certainly not since.

The 21st-century FBI, for all its treasonous acts of political corruption, has not escaped the darkness of Hoover’s shadow, a legacy of warrantless wiretapping and vengeful attacks against the director’s enemies. All of which has grown much larger under the former Obama Administration, and Mueller who ran the FBI from 2001 to 2013.

Remember, the FBI has faced down four commanders in chief who threatened to run the ship of state aground: in the Watergate scandal, in the Iran-contra imbroglio, in the Monica Lewinsky affair, and in the matter of post-9/11 spying on Americans.

In no case was a president able to disrupt or derail an FBI investigation. The truth is that the FBI has the power to say no to presidents, but presidents can’t easily say no to the FBI.

Presidents have been caught bending and even breaking the bounds set by their oath of office to protect and defend the Constitution. The bureau can check them with its immense investigative force, which gives it the ability to execute subpoenas and seize records inside the West Wing, to reveal the deepest secrets and expose the boldest lies: “I’m not a crook.” “We did not — repeat, did not — trade weapons or anything else for hostages.” “I did not have sexual relations with that woman. ” The FBI proved these presidential statements false.

President George W. Bush couldn’t stop Mueller, then the FBI director, from compelling him to scale back his illegal eavesdropping on Americans. “I am forced to withdraw the FBI from participation in the program,” Mueller wrote in a letter he carried to the White House in 2004. If the president did not back down, “I would be constrained to resign as Director of the FBI.” (Senior Justice Department officials, including Comey and, lest we forget, Wray, also threatened to resign in protest.) Bush backed down.

President Bill Clinton couldn’t stop the FBI from drawing blood from his arm; the DNA evidence proved he had lied under oath about his sex life. That led directly to his impeachment.

President Ronald Reagan couldn’t stop the FBI from raiding the National Security Council’s offices, where agents found proof that the United States had sold weapons to Iran and skimmed the profits to finance the Central American counterrevolutionaries known as the contras, aid that Congress had expressly forbidden. The bureau’s work resulted in the indictments of 12 top national security officials. President George H.W. Bush pardoned the Iran-contra gang, but a law-breaking administration had been caught red-handed and brought to heel by the FBI.

Not even Richard Nixon could stop the G-men. God knows he tried.

When Hoover died in May 1972 — six weeks before the Watergate break-in — Nixon installed a politically loyal stooge, L. Patrick Gray, in his place. “You’ve got to be a conspirator,” Nixon counseled Gray. “You’ve got to be totally ruthless.” Nixon tried to sabotage the FBI as soon as it started looking into the break-in, ordering the CIA to obstruct the bureau’s investigation, on spurious national security grounds. Gray destroyed devastating evidence linking the White House to the Watergate burglars. But to a man, the FBI agents on the case fought furiously against Gray’s attempts to undermine them.

Five leakers at high levels of the bureau made sure word got out. These included not only Associate Director Mark Felt, a.k.a. “Deep Throat,” but the head of the Washington field office, the supervisor who kept the running chronology of the case, and the chief and the lead agent of the white-collar-crime division. “They would meet at the end of the day and discuss what happened, what they knew, in the investigation,” Paul Daly, an intelligence division agent, said in an FBI oral history. “They would make a decision, a conscious decision, to leak to the newspapers. They did that because of the White House obstructing the investigation.”

Defying the president, his attorney general and the FBI director, they followed the evidence that made Nixon an unindicted co-conspirator in the obstruction of justice — and sent the men who had served as his campaign manager, attorney general, chief of staff and counsel to prison.

If Trump follows Nixon down the road to hell, the FBI will be on the case. As Asha Rangappa, a former FBI counterintelligence agent, recently wrote in the New York Times, “To ‘shut down’ the investigation at this point would require not just a face-off with Mr. Mueller but also with special agents in charge of multiple field offices with a vested interest in seeing their responsibilities through.”

Trump could fire the federal prosecutors — but others would replace them. And under the law, Mueller can be fired only for “good cause,” such as legal misconduct or a conflict of interest.

There is no such cause, despite the fact President Trump is completely innocent and the entire Trump investigation is politically biased.

The FBI and DOJ investigation into the alleged Trump-Russia collusion case has been running wild for two years, and now that the investigation is over many are calling for the investigators to be investigated. In other words, these biased agents have unlawfully tried their very best to hurt Trump politically as opposed to telling the truth about what really happened.