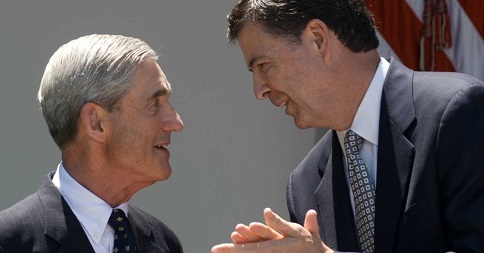 As reported – Solomon obtained memos from a high-ranking government official who met with former British spy Christopher Steele in October of 2016, who determined that Steele’s ‘dirt’ on Trump was inaccurate and likely leaked to the media.

The official Deputy Assistant Secretary of State Kathleen Kavalec caught several completely false assertions in the junk dossier. One red flag Kavalec caught was that Steele claimed that ‘payments to those recruited by the Russians to target the election were made out of the Russian Consulate in Miami.’ There’s only one problem with this claim — there is no Russian Consulate in Miami.

And yet according to investigative reporter Paul Sperry at Real Clear Investigations the FBI and DOJ, including Rod Rosenstein, James Comey, Sally Yates, Andrew Weissmann, Robert Mueller used the bogus document in their final report for the special counsel.

Mueller also met with and paid Fusion GPS, who was behind the bogus dossier during the investigation and likely used them in compiling their controversial final report.

Mueller’s team worked closely with dossier author Steele, a long-retired British intelligence officer who worked for the Clinton campaign. Mueller’s investigators went to London to consult with Steele for at least two days in September 2017 while apparently using his dossier as an investigative road map and central theory to his collusion case. Steele now runs a private research and consulting firm in London, Orbis Business Intelligence.

It’s not clear if Mueller’s office paid Steele, but recently released FBI records show the bureau previously made a number of payments to him, and at one point during the 2016 campaign offered him $50,000 to continue his dossier research. Steele was also paid through the Clinton campaign, earning $168,000 for his work on the dossier…

…Washington-based Judicial Watch suspects Mueller’s office may have farmed out work to the private Washington research firm Fusion GPS or its subcontractor Steele, both of whom were paid by the Clinton camp during the 2016 presidential election. Several law enforcement and Hill sources who spoke with RCI also believe Steele and Fusion GPS were deputized in the investigation.

The government watchdog group has requested that the Justice Department turn over the contracting records, along with all budget requests Mueller submitted to the attorney general during his nearly two-year investigation. It’s also requested all communications between the Special Counsel’s Office and the private contractors it used.

A Judicial Watch spokesman said its Freedom of Information Act request is pending.

The DOJ and FBI continue to push conspiracies on the American public. It is time for these crooked deep state operatives to face justice.

These treasonous acts of lies and deceit within the FBI and DOJ must be stopped.