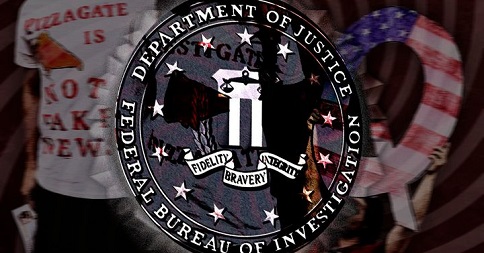 The FBI considers conspiracy theories that are born and spread online a dangerous breeding ground for domestic terrorists, according to recently revealed bulletin produced out of the agency’s Phoenix field office.

The bulletin specifically refers to QAnon, a baseless conspiracy theory that a shadow network is working against President Trump, and that an insider, “Q,” knows how it will be exposed. The FBI office also describes how QAnon theorists believe that Trump is leading an effort “to dismantle a conspiracy involving ‘deep state’ actors and global elites allegedly engaged in an international child sex trafficking ring.”

Trump supporters have embraced the conspiracy theory, wearing shirts and hats that feature the letter “Q” at his rallies.

Members of the QAnon community expressed their anger and disbelief on Twitter, exclaiming, “how can Q and POTUS let this happen?”

The 15-page bulletin is the “first FBI product examining the threat of conspiracy theory–driven domestic extremists” and lists instances in which suspects plotted or carried out “deadly violence” because of false, fringe theories that they had found online.

They include that a gunman who killed 11 people at the Tree of Life Synagogue shooting in Pittsburgh last October, for example, had reposted a Zionist Occupation Government conspiracy theory cartoon on social media. In June 2018, a man from Nevada decked out with body armor, rifles, and ammunition was arrested and referenced QAnon.

On Tuesday, Twitter suspended an account that blasted conspiracy content, including QAnon material, after the president retweeted a theory that Democrats are the ones “interfering in our elections.”

The FBI document also cites Pizzagate, the bogus theory that Democratic operatives tied to Hillary Clinton were running a child sex-trafficking ring out of a pizza restaurant in Washington, DC. In 2016, a man from North Carolina showed up to the joint with an AR-15 rifle, shot through a door, and aimed it an employee thinking he was saving trafficked children.

“The FBI assesses these conspiracy theories very likely will emerge, spread, and evolve in the modern information marketplace, occasionally driving both groups and individual extremists to carry out criminal or violent acts,” the bulletin states. “These targets are then subjected to harassment campaigns and threats by supporters of the theory, and become vulnerable to violence or other dangerous acts.”

In its bulletin, the FBI’s Phoenix Division also points out that because some conspiracy theories are highly partisan, major political events like the 2020 presidential election cycle will probably produce more extremists.

Although the bulletin acknowledges that conspiracy theory–driven crime is not new, it emphasizes how “today’s information environment” and “crowd-sourcing” have changed the way the content more easily spreads and evolves.

“It is logical to assume that more extremist-minded individuals will be exposed to potentially harmful conspiracy theories, accept ones that are favorable to their views and possibly carry out criminal or violent actions as a result,” the document states.

When asked about the Phoenix Division’s bulletin, an FBI spokesperson said that it is the agency’s standard practice to “not comment on specific intelligence products.”

“The FBI routinely shares information with our law enforcement partners in order to assist in protecting the communities they serve,” the spokesperson said.

To sum it all up, most Americans along with President Trump are now considered to be a Domestic Terrorism Threat in accordance with this bulletin issued by the FBI.