Home FBI The FBI Used To Have Integrity. Now Agents Lie, Cheat, And Break The Law

The FBI Used To Have Integrity. Now Agents Lie, Cheat, And Break The Law 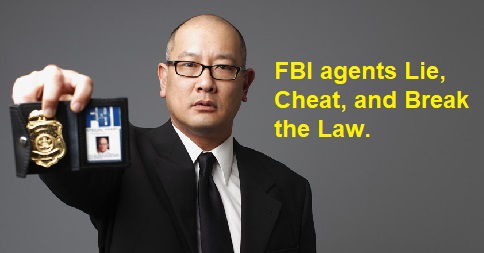 Does the FBI manifest fidelity, bravery, and integrity, or does it cut constitutional corners in order to incriminate? Can the FBI cut the cable television lines to your house and then show up pretending to be the cable guy and install listening devices? Can FBI agents and technicians testify falsely and cause the innocent to be convicted, incarcerated and, in some cases, executed?

In 2014, FBI agents in Las Vegas were on the trail of Wei Seng Phua, whom they believed was running an illegal gambling operation out of his hotel room at Caesars Palace. Instead of following him, asking questions about him, and using other traditional investigative techniques, a few agents came up with the idea of planting a wiretap in Phua’s hotel room.

They bribed a hotel employee, who gave them access to a place in the hotel where they could disable the cable television wires to Phua’s room. When he called for repair, they showed up pretending to be cable guys, and he let them into his room. They repaired what they had disabled, but they also illegally wiretapped the phones in the room. Then they overheard his telephone conversations about his illegal gambling, and they arrested him. A grand jury indicted him based on what was overheard.

The grand jury was not told of the wire cutting and the con job, but a federal judge was. Last week, he criticized the FBI for conducting an illegal search of Phua’s room, in direct contravention of the Fourth Amendment, which the agents swore to uphold, and he barred the government from using the tapes of the telephone conversations as evidence against Phua. If the government can get away with this, he ruled, then constitutional guarantees are meaningless.

These lawless agents should have been indicted by a state grand jury for breaking and entering by false pretense, but Caesars declined to seek their prosecution. No surprise.

It was surprising, however, when the FBI was forced to admit last week that in the 1980s and 1990s, its agents and lab technicians who examined hair samples testified falsely in 257 of 268 cases that resulted in convictions. Of the convictions, 18 persons were sentenced to death, and of those, 12 have been executed.

Some of these cases were federal, but most were state prosecutions in which state and county prosecutors hired the FBI to perform lab tests and compare hair samples from a crime scene with a defendant’s known hair sample. The faulty lab work and erroneous testimony destroyed the freedom of hundreds and the lives of 12, squandered millions in tax dollars, and impaired the constitutional values we all embrace.

You probably did not hear about the FBI cable guys or the admitted 96 percent rate of false testimony in cases of conviction. That’s because the FBI skillfully diverted your attention.

In an effort to pick a front-page fight with the government of Poland, FBI Director James Comey revealed last week that the very concept of the Holocaust has moved him deeply—so deeply that he has ordered all new FBI agents to spend quiet time at the Holocaust Museum contemplating its horrors. He argued that the terror of Nazi agents became so commonplace that its wrongness was no longer apparent to them. That’s probably true. The Nazis did so much killing that their acts of killing innocents became commonplace to the killers. Then he blamed the Poles for their own victimization because of the few among them who collaborated with their invaders. This brought the hoped-for fierce blowback from the Polish government and top-of-the-fold criticism of Comey for two days.

Earlier this week, the FBI announced the arrest of eight persons for attempting to leave the United States in order to join ISIS. The actual charge is attempting to provide material assistance to a terrorist organization. These ISIS people are truly monsters. Yet, Americans have a natural right to travel where they want and associate with whomever they please. The test of a truly free country is the right to leave it.

Moreover, this was a controlled FBI sting. The defendants were instigated by and under the watchful eyes of FBI undercover agents. The FBI admits that the defendants never posed any harm. How can it be a crime—or harmful—for people to leave the U.S.? If people with evil inclinations want to leave, let them go; arrest them when they return if they cause harm.

For 600 years of Anglo-American jurisprudence, the definition of crime has included the element of harm. No one was harmed by this sting except the taxpayers. Yet, this announcement dominated the news cycle as hoped for.

Why chastise the Poles, who suffered egregiously under the Nazis, in 2015 for the few who collaborated with them in 1942? Why entrap losers who harmed no one into thinking they could freely leave the country and join an army of monsters and then announce their arrest during a bad week? To change the subject; that’s why.

Will FBI agents who lie, cheat, break the law, and testify falsely be brought to justice? Will their superiors who condone this be made to answer? Does the FBI work for us, or do we work for it?