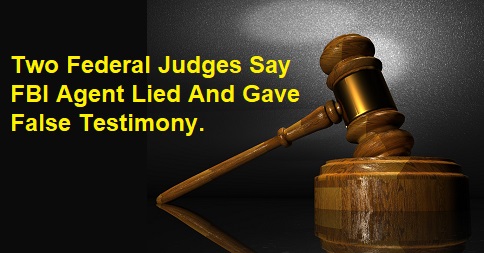 After two Rapid City federal judges ruled an FBI agent gave false testimony at a grand jury hearing, a judge must now decide if those statements and other alleged behavior “constitute a pattern of governmental misconduct” that means a rape indictment should be thrown out.

“It is exceedingly rare for a judge to make an express finding that a law enforcement officer gave false testimony. I have only seen it a couple times,” said Neil Fulton, dean of the University of South Dakota School of Law and a former federal public defender for the Dakotas.

Fulton said a judge ruling a witness gave false testimony means the witness testified in a “fundamentally inaccurate way,” that it was more than just a false recollection, “slip of the tongue” or memory issue.

Magistrate Judge Daneta Wollmann and Judge Jeffrey Viken both found that FBI Special Agent Mark Lucas gave false testimony to the grand jury — a non-public hearing where jurors decide if probable cause exists to indict someone — about an alleged rape of a 17-year-old girl in December 2016 near Kyle. The grand jury indicted Tolin Gregg, who was 18 at the time, on two counts of aggravated sexual abuse by force.

Lucas falsely told the grand jury that witness Brylee Red Owl (who is a cousin of the victim) said that Gregg raped the girl in his car, because a recording of Lucas’ interview with Red Owl shows that Red Owl never said the word rape, Viken wrote in a recently unsealed order. The agent then falsely said that Red Owl saw a bruise on the girl’s face when he said he only saw a cut. Lucas was also “misleading at worst and unresponsive at best” when he discussed Red Owl’s description of the girl’s reaction to the alleged rape.

Fulton stressed that the judges’ findings are only about Lucas’ testimony, not about whether or not the girl was raped by Gregg.

He compared the findings to a recent case where Roberto Lange, another federal judge in South Dakota, wrote in an order overturning a jury’s conviction that a Bureau of Indian Affairs agent twice “misstated” evidence while testifying to a grand jury, once by giving false testimony and once by giving an understandable misstatement.

Assistant U.S. Attorney (AUSA) Eric Kelderman could have tried to clarify Lucas’ statements about Red Owl but “there was no followup by the AUSA to clarify or correct obviously misleading or false testimony by the agent,” Viken wrote.

“This kind of careless grand jury presentation can have dire consequences after an indictment is returned. Rather than rage at the magistrate judge, the U.S. Attorney’s Office would better serve justice by assuring the competent and accurate presentation of grand jury testimony,” he wrote.

Fulton said that in future cases Lucas is involved in, defense lawyers can ask permission to tell juries the fact the Lucas has given false testimony in the past.

Wollmann also found that Lucas intimidated Red Owl during the interview so it can’t be used during trial. Red Owl only agreed that Gregg raped the girl after Lucas “threatened him” by saying he could either be a witness or charged with being an accessory to the crime, Wollmann wrote in an October 2017 report. She also said Lucas threatened Red Owl by saying he wouldn’t want his teaching career to have problems.

Viken said he found the threats were “likely … improper” but the interview can be used during trial. He said the fact that Red Owl plans to provide favorable testimony for the defense “eliminates a bulk of the prejudice the magistrate judge identified.” If Kelderman brings up Red Owl’s inconsistent statements about whether or not the girl was raped during trial, defense lawyer Dana Hanna can discuss Lucas’ alleged intimidation, Viken wrote.

A motion filed by Hanna in December 2018 asks Viken to dismiss the entire case due to a “a pattern of governmental misconduct” that threatens Gregg’s right to a fair trial. The motion mentions the false testimony and witness intimidation issues as well as the fact that Lucas knew that Red Owl took a video of the girl after the alleged rape, but never watched or obtained it.

During hearings on Thursday and June 13, Hanna argued that Lucas failed to obtain the video because he knew it would be beneficial to his client, and that Lucas wrote a fake note to try to prove that he reminded Red Owl to send him the video. Lucas vehemently denied both charges.

Red Owl testified that on Dec. 24, 2016, the day after the alleged rape, he told Lucas about the video. He said the video didn’t physically capture the alleged victim but recorded audio of her acting drunk and angry at Gregg about being a bad father. He said the girl never mentions being assaulted. Red Owl said Lucas never gave him his business card or told him to send him the video. He said he eventually deleted the video and sold his phone.

Couldn’t the video have “potentially very important evidence” for either side, Hanna asked. Lucas admitted it could.

Lucas said he didn’t watch the video or have Red Owl email it to him at the time because he had to deal with another case and because he trusted that Red Owl would send it to him. He said he never stopped by Red Owl’s house or applied for a search warrant to obtain the video at a later time. In hindsight, Lucas told Kelderman, he “should have just taken his phone” at the time. He said he wasn’t trying to hide any evidence.

In his response to Hanna’s motion, Kelderman said there is no “flagrant misconduct” to dismiss the indictment because while Viken and Wollmann found that Lucas gave false testimony, it wasn’t perjury. “In other words, SA Lucas misstated the facts, but he did not intentionally testify falsely,” Kelderman wrote.

Kelderman said Lucas tried to obtain the video but Red Owl refused to send it. He also said Hanna’s argument in his motion that the video will show the girl “not acting like a rape victim” is “offensive and lacks foundation of any kind” since there is no one way people react to rape, especially when still in the presence of the perpetrator.

Fulton said a judge deciding to throw out an indictment would be an “extreme remedy for extreme cases.”

He said judges usually try to find another option, such as suppressing interviews or telling the jury that the agent gave false testimony during the grand jury.

Viken said he has not yet made a decision about the indictment. He asked Kelderman and Hanna to submit briefs arguing alternatives to tossing the indictment and said he would make his decision at a later date.