We Cannot Trust The FBI 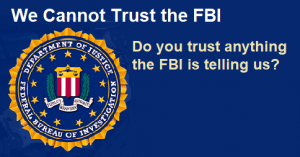 The FBI is discounting ISIS’ claim that the Las Vegas attack was jihad. But is the FBI really trustworthy?

The Islamic State says Steven Paddock converted six months ago. He filmed himself killing; jihadis do that and post it online. The attack was meticulously planned, as jihad attacks are, and Paddock likely had an accomplice. Paddock made numerous trips to the Middle East. Over 200 of his foreign financial transactions were flagged for possible “covert terrorism financing.”

Contrary to the ignorant, misinformed and delusional talking heads in the media, ISIS does not take responsibility for events that are not theirs. This has led even the New York Times’ terrorism expert to give credence to ISIS’ claims. The Philippines attack at Resorts World Casino was theirs. And there again, ISIS’ initial claims of responsibility were dismissed.

The Los Angeles Times reported Saturday that “the FBI investigated the Orlando mass shooter for 10 months — and found nothing.”

The Orlando jihadi who opened fire on gay nightclub revelers at the Pulse Nightclub called 911 during the attack and pledged his allegiance to the Islamic State. The FBI investigated the Orlando mass shooter for 10 months and found nothing.

The FBI was warned of the Muslim Boston bombers — multiple times — and did nothing. Their inaction led to the Boston Marathon bombings.

And in another case, an FBI translator married the ISIS fighter that she was supposed to be investigating.

The FBI was in on the planning of the jihad attack against the Garland Muhammad art expo in Garland, Texas. They did nothing to stop it, not even giving us a warning that my event was targeted by devout Muslims who meant to kill us Charlie Hebdo-style. We killed those jihadist. It was the security team I hired to protect my event that saved numerous lives, nothing the FBI did. We survived despite the FBI.

The FBI was in on the planning of a Boston plot to behead me. They did not warn me or alert my security team. It was a Boston cop who killed one of the Muslims who had attacked the cop on his way to New York.

The ISIS plot to carry out mass shootings in Times Square, the NYC subway, and at music concerts reported yesterday actually took place this past June. All three were arrested months ago, but the FBI had it sealed. What else are they not telling us?

In 2015, ISIS recruiter Mohamed Abdullahi Hassan, also known as Mujahid Miski, was communicating with the Garland jihadis in the lead up to the Texas attack. Hassan allegedly traded more than 550 messages with attacker Elton Simpson, from November 2014 up until the day of the May 3, 2015, terror attack. Miski was also in contact with the Boston Muslims plotting to behead me. It has also been alleged that Miski influenced the San Bernardino Muslim mass murderers. Where was the FBI?

While I do believe that undercover FBI agents have to play along with the jihadis they’re dealing with — because in order to be in an informant you have to have credibility — it’s a whole other thing if you’re encouraging and cheering on the proposed murder of Americans who are standing in defense of freedom of speech, and then not doing anything about it. Why did the FBI only have one agent there? And not a team waiting for them to shoot back?

But we know now they were in on the planning of the jihad attack, and did nothing about it. If you recall, the FBI only got around to a general alert just three hours before our event. It was Garland police, not the FBI, that coordinated all the super security efforts with our own security team.

The FBI knew about the impending attack — one of their agents told Simpson to “tear up Texas,” and an accomplice of Simpson was even communicating with the undercover agent at the time of the attack.

The Daily Beast reported that this accomplice “asked the undercover officer about the Draw Muhammad event’s security, size, and police presence, during the event, according to an affidavit filed in court. The affidavit does not specify what the undercover responded to questions about size and security.” Why not? Why weren’t the agent’s answers released?

They knew about the attack, yet they didn’t have a team there in case the jihadis started shooting?

It’s hard to escape the conclusion that the Obama FBI wanted me and the other speakers at the event dead. Dutch freedom fighter Geert Wilders was the keynote speaker; he has been living with armed guards for years for supposedly “insulting Islam.” My colleague Robert Spencer has received numerous death threats from Muslims. Cartoon contest winner Bosch Fawstin drew Muhammad. Did Obama’s pro-Islam FBI want us all dead?

What other conclusion can be reached?

So I ask you, do you trust anything the FBI is telling us?