Home FBI Why We Don’t Trust The FBI

Why We Don’t Trust The FBI 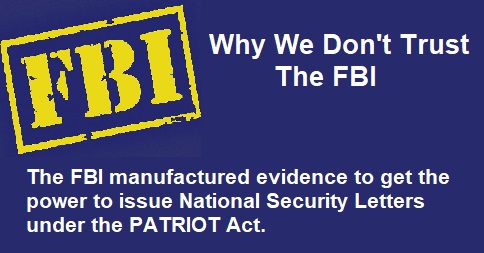 In July 2005 when there was a terrorist bombing in the London subway system the FBI, using a perfectly valid and legal subpoena, asked for and obtained documents from North Carolina State University about a possible conspirator. That apparently wasn’t good enough for the FBI. They wanted the agent to get the documents using a National Security Letter (NSL) under the USA Patriot Act. They made him return the documents and then issue a NSL:

Under the USA Patriot Act, FBI counter terrorism investigators can self-issue such letters to get phone records, portions of credit reports and bank records, simply by certifying that the records are relevant to an investigation. Unlike subpoenas, NSLs do not require probable cause, and at the time obliged the recipient to not discuss the demand with anyone, ever. In contrast, gag orders attached to grand jury subpoenas have expiration dates.

FBI agents have relied heavily on the power, issuing more than 100,000 NSLs in 2004 and 2005 combined. The first audit of the FBI’s use of the power found the agents became sloppy in their use of the power and one HQ office went rogue and issued hundreds of fake emergency requests for phone records.

The FBI knew that universities (and health records) were exempt at that time from NSLs. The NSL was rejected by the university’s legal council, pointing out additionally the documents had already been produced in response to a legal subpoena. This incident was then cited by FBI director Robert Mueller as evidence that intransigent universities were obstructing legitimate terror investigations so the agency needed the power to get information without resorting to the courts.

“Now in my mind, we should not, in that circumstance have to show somebody that this was an emergency,” Mueller testified on July 27, 2005. “We should’ve been able to have a document, an administrative subpoena that we took to the university and got those records immediately.”

It’s not clear if Mueller was lying under oath or didn’t know the information had been turned over before the faulty NSL was issued. The FBI is now admitting an NSL was not needed or even appropriate. They have no explanation for the incident.

Maybe djinning up a phony need for overreaching powers? Just a thought.

In 2005, the FBI manufactured evidence to get the power to issue National Security Letters under the PATRIOT Act. Unlike normal subpoenas, NSLs do not require probable cause and you’re never allowed to talk about having received one, leading to a lack of accountability that caused them to be widely abused. The EFF has discovered via FOIA requests that an FBI field agent was forced by superiors to return papers he got via a lawful subpoena, then demand them again via an NSL (which was rejected for being unlawful at the time), and re-file the original subpoena to get them back. This delay in a supposedly critical anti-terror investigation then became a talking point used by FBI Director Robert Mueller when the FBI wanted to justify their need for the power to issue National Security Letters.

When a North Carolina State University lawyer correctly rejected the second records demand, the FBI obtained another subpoena. Two weeks later, the delay was cited by FBI director Robert Mueller in congressional testimony as proof that the USA Patriot Act needed to be expanded.

The strange episode is recounted in newly declassified documents obtained by the Electronic Frontier Foundation under the Freedom of Information Act. The documents shed new light on how senior FBI officials’ determination to gain independence from judicial oversight slowed its own investigation, and led the bureau’s director to offer inaccurate testimony to Congress. The revelations are likely to play a key role in Capitol Hill hearings on the FBI’s use of so-called national security letters, or NSLs

At issue is the FBI’s probe of a former chemistry graduate student at North Carolina State University who was then suspected aiding the deadly attack. The student has since been cleared of any involvement.

The agent investigating the student in the Charlotte, North Carolina field office obtained a grand jury subpoena demanding some university records on the student. But he was then advised by superiors in Washington DC to return the papers and draft an NSL demanding the documents instead.